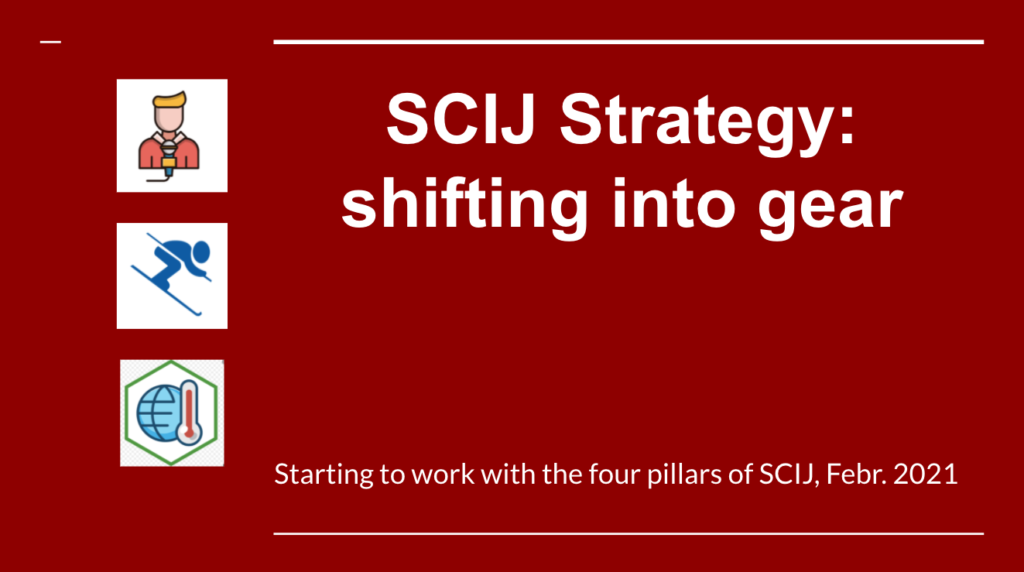 A few days ago we released a new SCIJ strategy based on the things you have been telling us as far back as 2009 and some benchmarking across a few international organizations. This new plan is now documented with clear actions that will allow us to act on four key pillars:

While we won’t be seeing each other on the ski hills this coming winter, we do have the unique opportunity by taking this precious time to begin the reshaping of our organization in a year-round ‘Journalism First’ organization. As a new-minted International Association, never has there been a time for us to come together as ‘One SCIJ’.

I’m delighted to see so many of you express such a strong interest to participate in the renewal of our Association. As we explained during the unveiling of the brand new Strategy, many hours have been invested to consolidate the comments you’ve provided, time and time again, over the past ten+ years. Other, similar associations should be so lucky.

We began testing various elements of the strategy last fall when we set up some virtual think tanks on matters of interest to our members and posted the results right here.

Many of the tools that SCIJ has used over the years (i.e. SCIJ news, the communications prior to meetings, the blue book of contacts, etc.), have disappeared as SCIJ began shifting its core values. The response from and growing participation of SCIJ member nations indicate that there’s never been a greater time to redefine and embrace the opportunity to put SCIJ on the path to being a new hallmark association that is focused on putting journalism first and keeping it purposeful and relevant throughout the entire year.

Once again, I’d like to personally thank all of those who have chosen to volunteer some time and get involved. We look forward to seeing the quarterly progress reports.